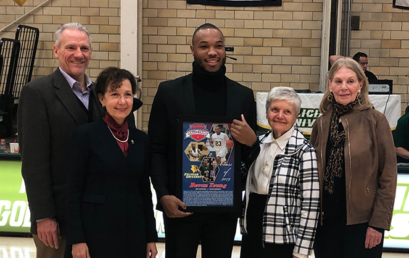 Devon Young a 2011 graduate of Felician University was inducted into the Central Atlantic Collegiate Conference (CACC) Hall of Fame in a ceremony at the Rutherford Campus on January 15.

A model student-athlete Young earned Academic All-American honors his senior year and was selected as Felician Male Student-Athlete of the Year. He completed his B.S. degree in Accounting in 2011 with a grade-point average of 3.70, also earning three Arthur Ashe, Jr. Diversity in Athletic Awards. “It is an honor being inducted into the CACC Hall of Fame and representing Felician University,” Young said. “I am grateful to the committee. This achievement would not have been possible without the support of my family, coaches and teammates.”

Young was presented for induction by Felician President Dr. Anne Prisco and CACC Commissioner Daniel B. Mara. At an on-court ceremony honoring Young at the conclusion of Felician’s women’s basketball game against Post University Felcian President Dr. Anne Prisco said, “ Congratulations go out to Devon Young who continues to make Felician proud, known not only for his athletic accomplishments but for his citizenship efforts as well.”

Currently Young is the General Manager for the youth basketball program Basketball Stars of New York and continues to be a role model for young people. Young is engaged to be married to Felician Alumna Samantha Ortiz who played softball and volleyball for the Golden Falcons.

Felician’s 2007 Men’s Cross-Country Team was inducted into the CACC hall of Fame Three years ago.

Felician University engages over 2,300 undergraduate, graduate, and adult students through programs in Arts & Sciences, Business, Nursing, and Education. Universal Franciscan values of social justice, compassion, and respect for human dignity serve as an inclusive foundation for transforming the lives of tomorrow’s leaders. Felician University’s education is ranked 3rd best return on investment for private colleges in New Jersey 2018 by the PayScale.com College ROI Report and is ranked #1 safest college campus in the state by niche.com.

Felician Ushers in the New Decade With a Brand-New Website

Literacy in a 21st Century Language